This blog is not a political statement.

So called “blind bhakt” did not like it and apparently unsubscribe my page without reading blog. Reality check : GDP of India has taken a hit over a period.

Below is link of 2017 blog
https://atulgandhicom.blogspot.com/2017/12/modi-win-government-failed-deprived.html

Modi got economy with GDP of 7% in 2014, which come down to or below 5% in 2019. No one come forward to take credit for it or analysed what went wrong, and how things can be improved

Reality is people trust Modi but Modi did not trust people

People shown blind faith in Modi by
: standing in queue for money during demonetisation
: ring the bell / thali in evening 5 o clock
: lighting diya in balcony at 9 o clock

Things would have been different had government walked along with Indian business to take India forward. Reality is Modi had been unfaithful to Indian business.

I mentioned about corruption and black money in 2017 blog
When Britisher left India, how much “black money” India had? I heard from elder (generation) people, there was time in India, if some one has to earn money, it was in black, citing reason of hyper tax rate / harassment

At the time of demonetisation, initial estimate was say 3 to 5 lac crore money will not come back. Modi was fearful of consequences (thereby allowing to deposit 2 lac / per person and no question asked) and people were enough smart.
In country where people do puja of Goddess Lakshmi, people got almost all 15 lac crore converted in white. People respected Mody by peacefully standing in queue but probably shown more respect towards Goddess Lakshmi

What Modi achieved is a blow to economy especially MSME.

Things would have been different, had Modi
: Given respect to India / Indian people / Indian business
: Talked with people / got feedback from people (reason for doing business in black money)
: Work / acted / pacified their difficulties / concerns
“Ease of doing business” would have become reality

If you hear FM speech in Loksabha / Rajya sabha, it was in the same in tone Modi given speech at the time of demonetisation. Both did not trust Indian business and gone ahead to bring down Indian business

GST was good in concept, a single law / tax, removing anomalies / difficulty to follow multiple tax regime. It was seen in other countries, when GST gets implemented, GDP shows half a percent or more growth.

In India post GST implementation, GDP was flat and then went down

If we are using say computer / laptop / mobile we expect operating system runs smoothly, but “the way” GST implementation was poor, leading damage to economy

If you don’t believe it just co-relate pre and post timing of IL&FS event with GDP / Business in India.

Amount of Rs 100,0000 crore loan was big. Once news come, all financial intermediary were / holding hand/ reluctant to lend. Views was DHFL / Yes Bank and even Indianbulls is seen as next likely defaulting entity. It was economic turmoil. Number of names come forward. Business also started holding protecting capital / money flow/ payment leading money rotation got reduced in economy. GDP which was growing at 7%, come down to or below 5% in 2019. Things would have been different had quick action & resolution found in 2018 itself.

In 2009 the way Satyam computer issue was handled, IL&FS should have been resolved by end of 2018 itself. It is expected to resolved in July-2020

Also like to mention India Inc does not strongly believe in Audited numbers. There is need to improve governance / audit framework / transparency system in audit.

Since appointment of Nirmala Sitaraman as Finance Minister, we keep we had appreciating her and here is reason for it. 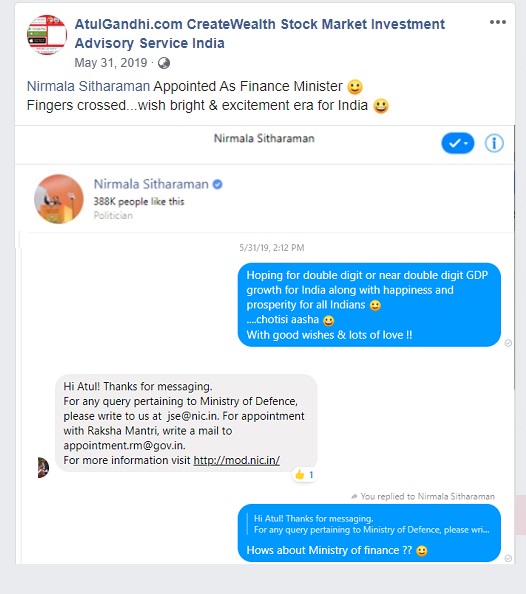 “Unprecedented, genuine extraordinary move & response by FM Nirmala Sitharaman (Unlike any other past FM)

Keeping foot down while being ground to earth & ready to listen, FM Nirmala Sitharaman has taken number of measure that should result in boosting sentiment and business too
Also there will be two more announcements in next week
....finger crossed :D
Hope stock market will bottom out soon
Thumps up & Cheers
Wish to mention FM Nirmala Sitharaman was considerate to take more questions in press conference ;)
Many many congratulations, thanks & love” 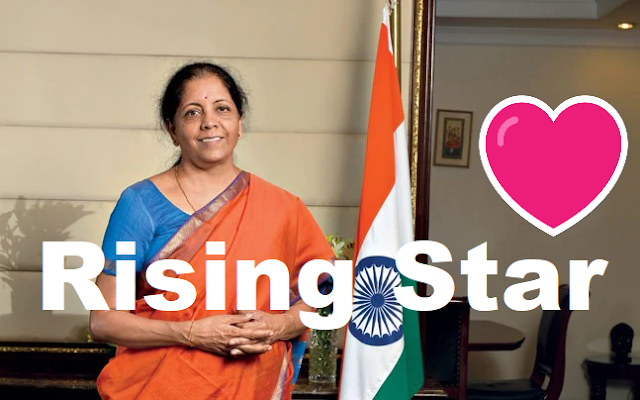 Since 1994, I am observing stock market / indian business / economy. I have seen number of finance minister / budget / policy / business cycle. I have not seen any past FM travelling to number of city to meet people / listening to problems / issue / concern, and solving it

In past Facebook post, we said She is darling of stock market, today in blog I am mentioning her as Rising Star.

Off course we can’t believe in political person. In past FM P. Chidambaram had given dream budget, In 1991 FM Manmohan Singh saved Indian economy by liberalisation. But afterwords they given political budget and changed approach towards economy

I take this blog as opportunity to appreciate Raghuram Rajan, an outspoken personality, who joined in turbulent economic environment, taking bold steps and leaving behind a credible & fastest growing economy with low inflation 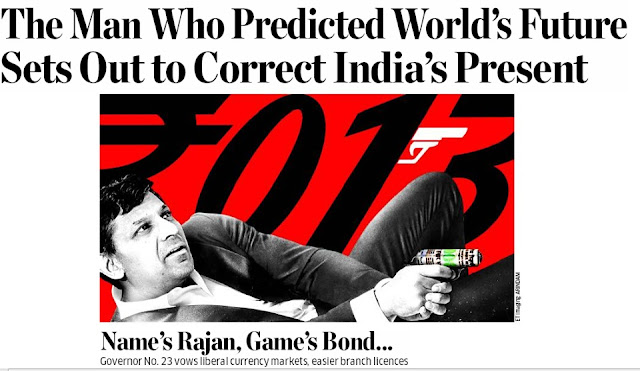 I would also like to appreciate Sushma Swaraj. She was available to help Indian people in any part / corner of world on single tweet request. I guess She played important role in “Operation Rahat” (not made much headline in Indian media) Hope sometime in future Akshay Kumar act in movie based on this event :D

Also appreciation to Manohar Parrikar. I have not read much about him but holding great respect for simplicity and caliber

I have seen interviews of Krishnamurthy Subramanian Chief Economic Adviser, people from NITI Aayog, various secretaries and even Piyush Goyal. All these people talks about typical theoretical / bookish concepts which are already known to people since many years. There is no out of box thinking / transformational policy measures. Apparently they are after media fame / glow and nothing more.

In past blog I mentioned about “Make In India By Foreign Investment vs Make In India With Indian money”
Modi work only in direction to get foreign investment in manufacturing, which lead to minimal success. Rather than going after Indian business had Modi given red carpet welcome to Indian business to invest in Indian growth story, Indian GDP would have been near double digit growth

Modi followed appeasement cum slavery policy towards Indian farmers by loan waiver. Also before election made payment of Rs 6000 to every farmer. Apparently it seems like officially vote for money. Atal Bihari Vajpayee was a visionary leader. He had plans of project for interconnecting rivers across India and creating water canal flow across India. Subsequent government did not follow this projects. It’s pity to see that even after 70 years of independence, farmers are not self sufficient. Wish we can provide 24/7, 12 month abundance water and electricity supply to farm land and use “Amul dairy development” kind of model to sell farm produce. May be I am day dreaming ;)

Don’t you think there should be too much work / abundance of jobs / scarcity of workers – people forjob in India?
Reality is large part of working demographics / adults spends time on unproductive TicTok

Modi divided India in two parts
: Those who favour Modi
: Those who oppose Modi
Indian people spend time on Twitter / Facebook / personal interaction in fighting with each other / appreciating Modi, rather than creating something meaningful

Can there be +ve as well as -ve side of person / decision / action?

Do we need only one person leading India / one man show or there should be group of people taking India forward?

I don’t like to write blog with criticism. Wish this is my last criticism blog in this life :D. Hope to write positive and inspiring blogs in future

Posted by Atul Gandhi at 7:47 PM No comments: