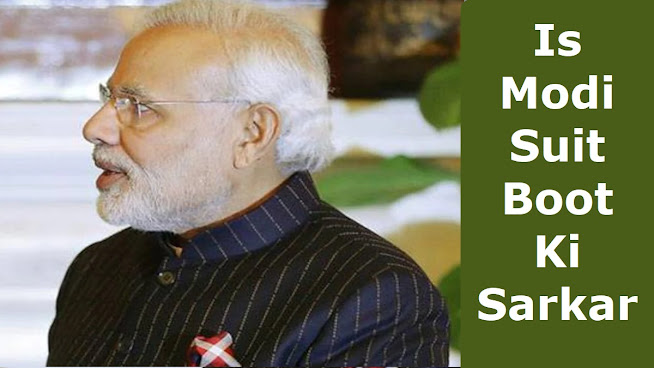 Modi Father Of Organised Business in India
Is Modi really a Suit Boot Ki Sarkar?
Is China a friend of India?
Not very comfortable writing a criticism blog. Event happened a year ago...now updating on blog
2020, approx. a year ago,  In the middle of lockdown....In the era of Modi 2.0,an amendment come to Investor advisor regulations (PR No.37/2020 03Jul2020)
An Investment Advisor having more than 150 clients should pay Rs 500,000 as fees
Have you ever heard of
: If a shop owner sells goods to more than 150 + peoples in a year, he needs to pay special charge to municipal corporation?
: If a doctor treats more than 150 patients, he needs to pay more money to government?
: If 150+ people watch a TV channel, they will be charged differently?
In the era of internet anyone can have thousands of followers / viewers....This was one more amendment towards institutionalisation of stock market business
In Modi era we saw flip flopping policy as well as bringing number of amendments/change to Investor Advisor regulations
In past I have written blog institutionalisation of stock market business. Only few handful corporate controlling / having large market share of securities business. So called institution did not come forward to ask investors to sell investments prior to market fall (due to corona pandemic) happened in Feb/Mar 2020 or ask to invest more money when market went down afterword.
Past blogs in this regards
Is Investor is a loser with SEBI’s “Research Analysts” regulation
https://atulgandhicom.blogspot.com/2015/01/is-investor-is-loser-with-sebis.html
Narendra Modi Creator & Destroyer Of Indian Business
https://atulgandhicom.blogspot.com/2017/05/narendra-modi-creator-destroyer-of-Indian-business.html
Is SEBI Holding Back India And Indian Investor?
https://atulgandhicom.blogspot.com/2017/11/is-sebi-holding-back-india-and-indian.html
|| Shree Ganeshaya Namah || Advisory Service Deactivated
https://atulgandhicom.blogspot.com/2017/12/shree-ganeshaya-namah-advisory-service.html
This announcement come in Jul 2020  & later in 2021 it got uprated with lower fees Of Rs 15,000 (without mentioning reason)
~~~~~~~~~~~
Modi is probably father of Organised Business in India
Policy and decisions in the Modi era, have helped large companies to control majority of money/ market / economy and rest of population be like middle class. Whatever Modi has done is affected SME & MSME and indirectly benefiting big corporates.
May be it demonetisation, “the way” GST got implemented, least attention / not handling IL&FS  saga properly, recent lockdown or PLI scheme
I am not favoring black money or against GST. People who stands in queue for demonetisation or ring bells / light lamps, could have respectfully helped government. GST and removing black money should have been done neat way
Modi’s policy /decision helps large corporate and rich people, so they are happy
Modi gives some freebies to lower income group people, so they are happy
Modi throws emotional speech / appeal to middle class and these people come on social media saying modi modi.
Post 2014 rich people got more prosper. Life is miserable for SME and MSME
~~~~~~~~~~~
Modi is name, fame, image, credit & attention seeking person. Observed his behavior on number of occasions.
~Probably being in stock market we see things differently
When corona move out of China we used to track europe, iran and US. By February 2020 we knew that lockdown is coming to India. Modi could have easily given say 15 days time for people to settle down before lockdown. But then how’s about getting fame by doing herogiri? Come down typically in evening at 8 pm on national television and bla bla to take credit from Corona fear.....Same Modi behaves differently in 2021 during west bengal election rally, gathering of large crowd without following any corona guidelines (In the mid of second wave of pandamic)
~Number of people have worked for Ram Jamnabhumi. I remember 1980 decade Rathayatra and so on....What was Modi’s contribution for Ram Jamnabhumi.... but throughout on puja day Modi was appearing on television
~Indian scientist makes achievement in space and credit seeking Modi come forwards to makes an announcement.
~Nobody really knows what’s was reality of Rs 20 lakh crore package
But no one come forward to take credit for GDP growth at 5% in 2019 ( a year prior to corona). Prior governments of congress were said to be corrupt, still GDP was doing reasonably good in congress era
~~~~~~~~~~~~~
Is China is friend of India?
Those who got problems will all countries whom it shares it’s border, can’t be anybody’s friend. But in a way China has helped India a lot.
Some time people don’t work unless they are pushed for doing work.
In the first term, 2014 to 2019 Modi used to give only Bhashan (speech) Make in India. Ground reality was different, hardly little money got invested in manufacturing. In 2020 China gave ‘tapli’ to India at Galwaon. Modi become serious of making India a larger economic power. PLI scheme come into picture, there was talk on labor laws. Thousands of crore got invested in manufacturing.
What Modi has done is boomerangs things and has delayed economic prosperity to majority of population. Modi can’t stop aspiration & dreams of 140+crore people.
BJP is good political party.  Atal Bihari Vajpayee was a visionary leader. Hope “Get well soon” to Modi or may be post 2024 election someone else from BJP leads country
You can read blogs on Modi term I & II
2017
Modi Win & Government Failed, Deprived Indians
https://atulgandhicom.blogspot.com/2017/12/modi-win-government-failed-deprived.html
2020
Modi Win & Government Failed, Deprived Indians Part 2
https://atulgandhicom.blogspot.com/2020/04/Modi-win-government-failed-deprived-Indians-part-2.html
Posted by Atul Gandhi at 11:30 AM